So I’ll post about the weather, god I hate the wind we got these days, it’s insane, the commute home today was something like 12 min slower, pure hell fighting the wind.

In other news, I’m going to pick up the new bike for the kid today, a 24″ race/cyclocross bike with sti shifters and stuff, it’s going to be his 10 year birthday presents, there shall be pictures in the next post!

There was a thread on the happymtb forum about a cx round today at 0930, so I joined in.
It was fun, it was tough it was worth it!

Here you can see where I met up with the others and were we went, fun times, not 100% exact map due to gps issues.. 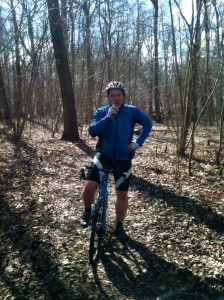 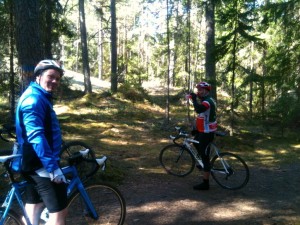 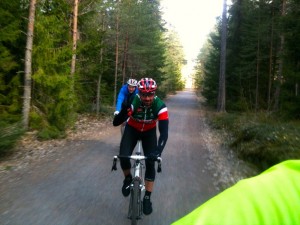 Afterwards I went over to Leffe to wash bikes, clean off all the mud and grime from this ride, awesome day so far!

Went out for a trip to XXL for some browsing (was looking for kiddo shoes and a bell for his bike), but I found something else to.

My first real cycle jersey, matches my summer bib’s and the color of my bike fairly good to, also added a BBB chain cleaner, since I’m keeping the bike indoors.. 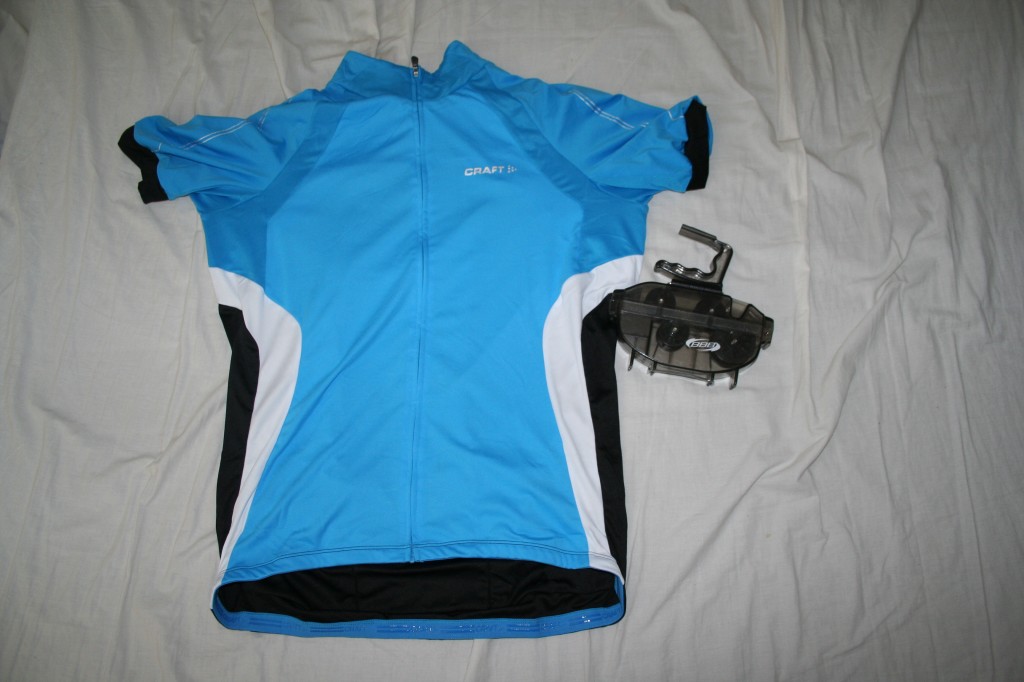 …. Since today after some encouragement from the wife and lots of fiddling I finally got the fenders on to my poison.

I gotta say though, it’s not as straightforward as it looked when I ordered them, the frame has some fiddly parts, like the area around the disc brake, which is where the fenders should sit, anyway. they are on, they look pretty OK, just some minor adjustments to the rubber straps left! 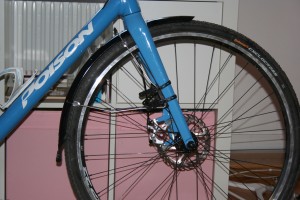 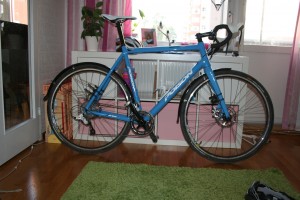 Front wheel closeup and the full bike, not to shabby, but not 100% either, the back fender needs a whee bit of adjustment to look less „egg” shaped.. 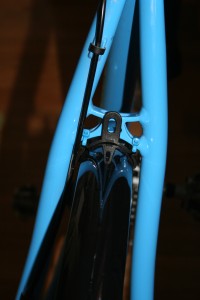 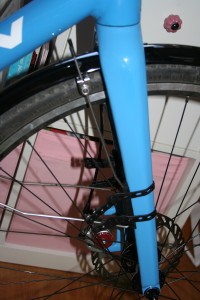 Back attachment, with almost matching colored zip-ties and the front attachment with just the rubber bands, front fender fits snugly!

Still need to get a ride with them, but the coverage looks great and they should keep me as dry as any fenders will!

After a detour around half of the Nordic region I got my Planet Bike fenders, which I had high hopes would fit on my CX frame, but alas, “#%”#¤%& they don’t.

I’m getting a bit frustrated but my options seem to be get smaller tires, like 28 mm ones maybe, or look for some other fenders, I’m thinking about the “SKS Velo 47” and some for of home made attachment to the frame, update will follow! 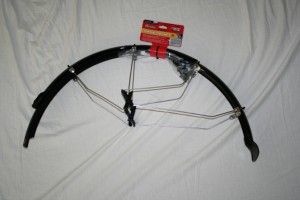 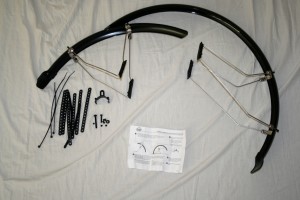 Pretty proud of my second day to work, a little short breathed when I got to work, and the weather was no good (rain and wind against me).
Even with this I managed what for me at least feels like a solid pace and time to work, it’s about 10min quicker then some of my previous commutes, bike feels great so far, a little fine tuning on the gear changes is needed, and I’m not 100% sure the saddle is right for me, but I’m giving that a week or two before I look in to a new saddle.

I never go to lidl, but I still did..

Well, again I gotta point towards the happymtb forum and a thread about cheap biking stuff on lidl, fair enough I thought and checked the ads for the bike stuff.

So what did I buy and how well did it work out? 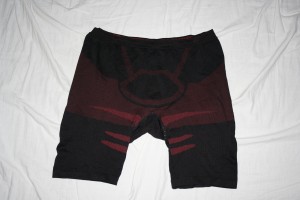 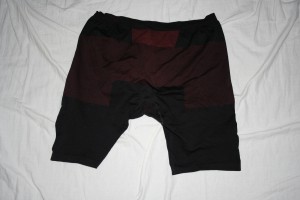 Underwear, these I bought in hope that I would get less chaffing in my crotch area since biking during winter all those layers kept wrinkling, to my surprise they work, they are tight sitting, long legged and keep things in check (for now, only had them like one month), but for the price of 69 SEK (I think), I would rate this good value! 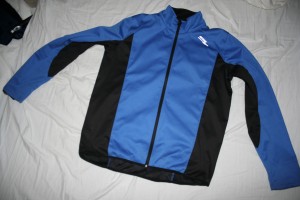 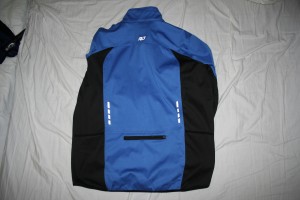 Bike jacket, in blue cause I wanted something to match my new bike a little better then my old green jacket…
Again, really cheap 149 SEK, it’s got two open pockets on the back (fits lots of things, bottles, tools, pump and tube) and one pocket with a zipper, for valuables.
The jacket is warm, dosent feel like it breaths that well and my arms got really “sticky” when wearing a short sleeve under it, it’s got a nice fit tough and for colder weather with a long sleeve dry-tech shirt under it was nice and comfy!
Only thing I miss is pockets in the front of some sort, for my phone when I use Runkeeper on my ride.. 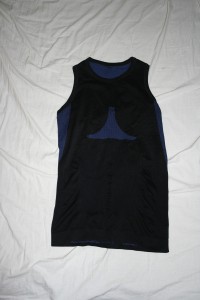 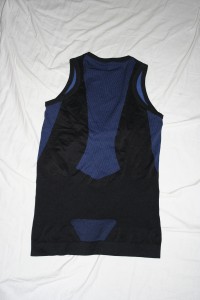 Singlet, I haven’t actually used it yet, more then wearing it inside (looking awesome as ever, since it’s maybe I tiny bit to small still… still it feels soft and comfortable, and again it was dirt cheap and if my mind is right, it was like 69 SEK. 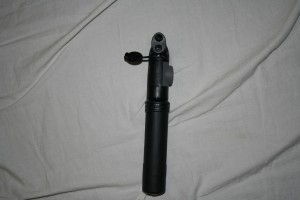 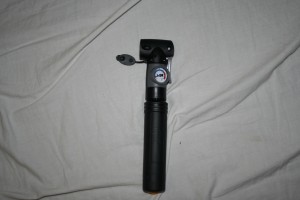 Finally the last piece (that I could be arsed to photograph and write about, I also bought some socks, whoop whoop).
A mini pump, fits both kind of valves, got two modes, high volume and high pressure and when tested it worked like a charm, doesn’t have the biggest cylinder in the world and it takes some time to fill a tire up, but I reached 80 psi after awhile so for emergency use, perfect (also it was 49 SEK so again, cheap).

That’s it, everything worked better then expected!

Right, I’ll start with the online shop and my feelings on the 5 weeks of dialog with this German company!

It all started the 11th of March, after I got a tip from people over at the HappyMTB forum, I started looking at the page and fairly quickly settled for the Opium XI disc SRAM Apex, obviously I had questions before ordering so I called them quickly to check it out, I first talked to a woman, who answered in German, I asked if she spoke English and she politely asked me to wait while she transferred me to someone else, the man I got to speak to spoke good English and answered all my questions (delivery time, 4 weeks about, no additional time for custom color, yes the bike and wheel should carry my weight).
With all my answers the next “problem” started, choosing the color, after many, many hours by my wife in Paint Shop pro, I settled for the light blue, and man, was it good looking! 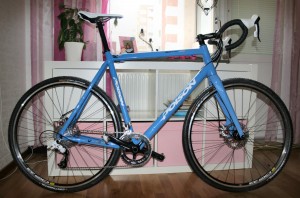 Well, I started the ordering process and changed the saddle to a Fi’zi:k tundra white, I chose my own color, RAL5012 Lichtblau and accepted terms and payment.

Right, from I placed the order it took only a couple of hours before I got the confirmation, and just one day for them to ask me the first question, decal colors, since I didn’t specify anything

The next day I called them to make sure my measurements were good, and was instantly confronted with a couple of questions and to my surprise a offer to “upgrade” to the Shimano 105 version, now I say “upgrade” because I didn’t want Shimano, nothing against them but I wanted double tap, non the less, the offer was much appreciated!

The day after that I got curious about the painting as they only listed powder, and the fork is carbon fiber, so I asked them if the fork would be painted, and behold answer was no, but if I wanted to they could, no added cost but it would take about a week longer then, bringing the total time for me to wait up to 5 weeks, I accepted this and moved on.

Later on I also asked about mudguards, and told them to send something that would fit and cover everything, they did put a line on the bill saying “SKS Race Blade VR + HR Set fitting for Opium” but there was no mudguards in the box with the bike, at the time of this review, I sent them a mail asking about it, telling them that I’ll fix my own here and not bill me for the ones I didn’t get, I’ll update this post once I know the outcome, but based on my contact with them so far, I don’t think it will be a issue.

Skip ahead a few weeks, to Friday, April the 12th and I got a mail from the transport company, the bike was shipped.
from there on it took awhile and I got nervous so I called them the next Wednesday (17th of April) and I called the company, since the last update was Monday, stating it was in Hamburg, it took about 20-30 minutes of calling, several transfers before they told me the package was handed over to the Swedish partner, whom called me about 40 minutes later to confirm delivery the next day, I told them to call 30 minutes ahead since I was home on paternity leave.

D-day, Thursday the 18th, man was I waiting, and waiting, and waiting…
Around 13:00 I couldn’t wait anymore and called the local transport company, after a bit of fiddling I got in contact with the transport office who called the driver, and I was told he tried to call me three times which considering I’d been home all day and reception is great here, I had no missed calls or messages on my voice mail, must have been a tiny lie (speculation on my part) and I told them to come back, which they did.
40 minutes later I had a huge box in my living room..
A few notes on the delivery, Poisons information was to ship it upright, the local company at least had it flat, the box was dirty and damaged, but the bike was OK, so I guess that’s something.

So, the quick pro’s and con’s:

Bottom line, I’m very pleased with how it was handled, the cons are so small it’s almost not worth mentioning, the people I spoke or mailed with responded quickly (mail usually same day, no later then next morning) and the bike was delivered at the promised time!

Now back to the good part!

What can I say, I only biked for maybe 3 hours, a quick trip to find a bottle cage and some mudguards (I found the cage, not the mudguards, so I ordered some online) and a trip with my coworker who came to pick up my old bike, as he’s borrowing it for the summer/fall.
Anyway, the bike, man compared to the old one it’s lighter, quicker, speedier and more stable.
Things I like about it so far:

A few things that bummed me out a little as I thought they said it had mudguard mountings (eyelets and stuff), which it didn’t but that might just be language barrier and misunderstandings, and I did order a pair of Planet Bike Speedez mudguards, hopefully that will be all I need.
UPDATE: Issue with the mudguards cleared out, Poison removed it from the bill, the total of the bike became 1314€ or just under 11.400 SEK!

I guess I’ll post a review after commuting for awhile, in the meantime check out the pictures on my bike page

Finally the wait is over!
I got my poison opium disc cyclocross bike, she looks awesome! 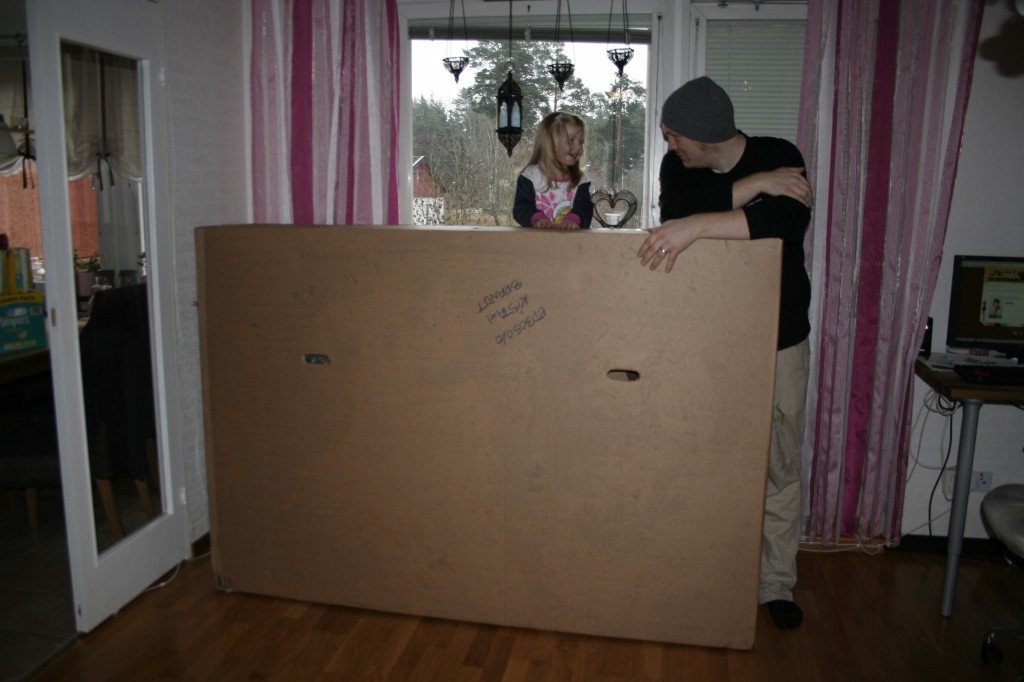 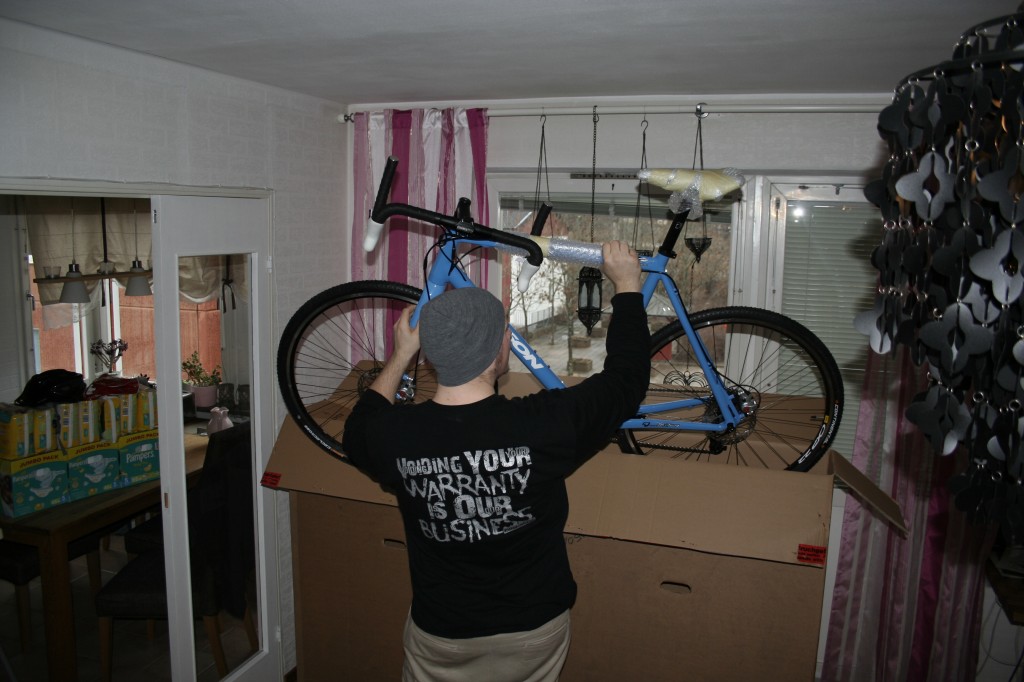 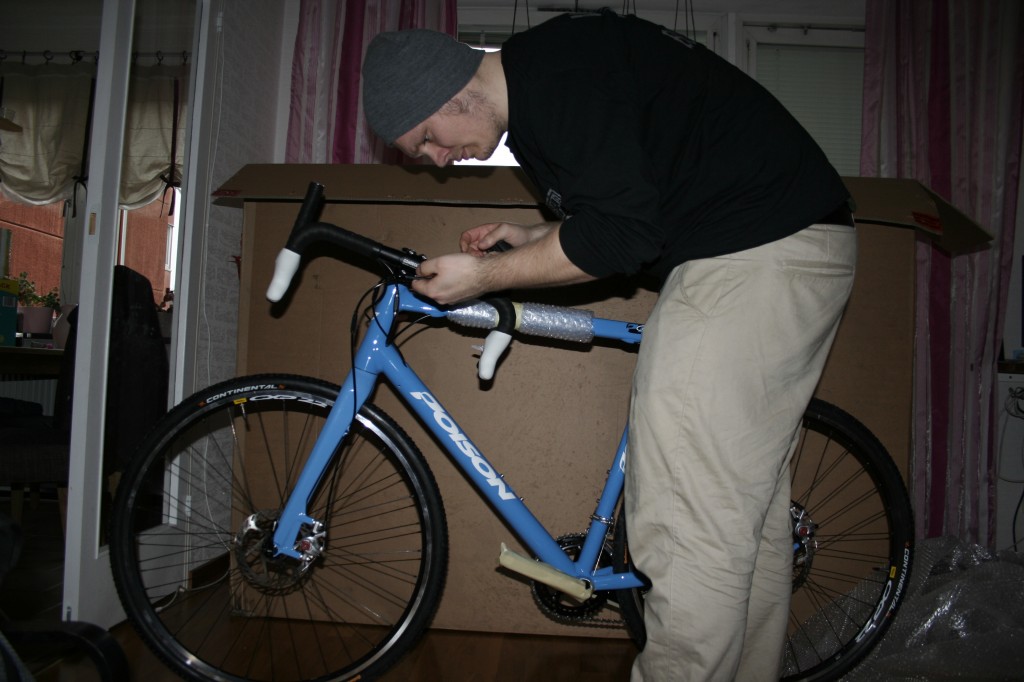 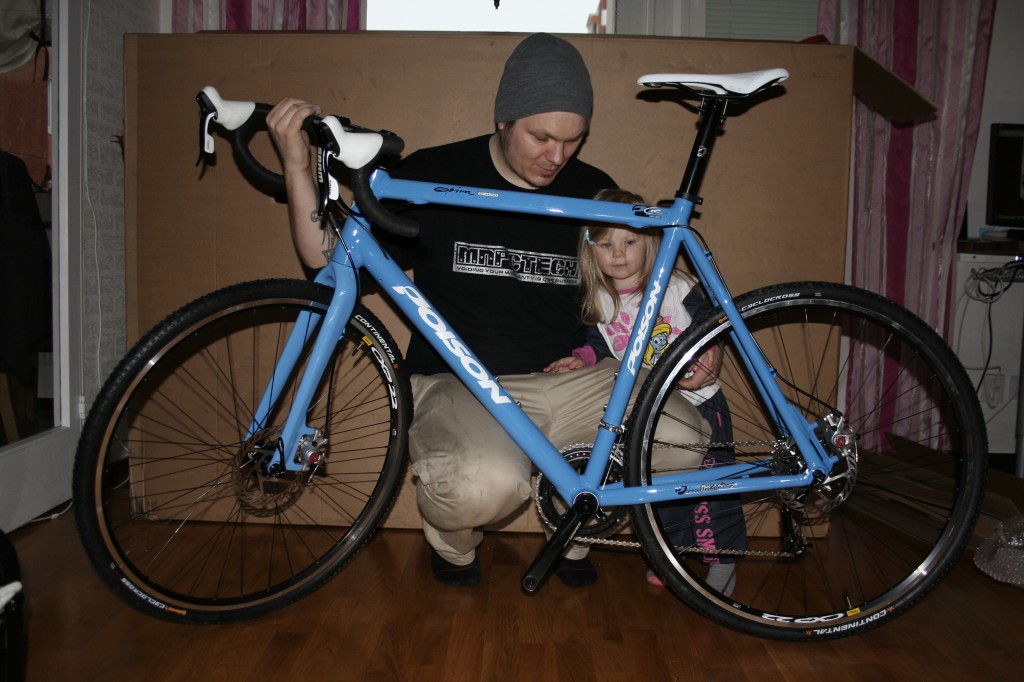 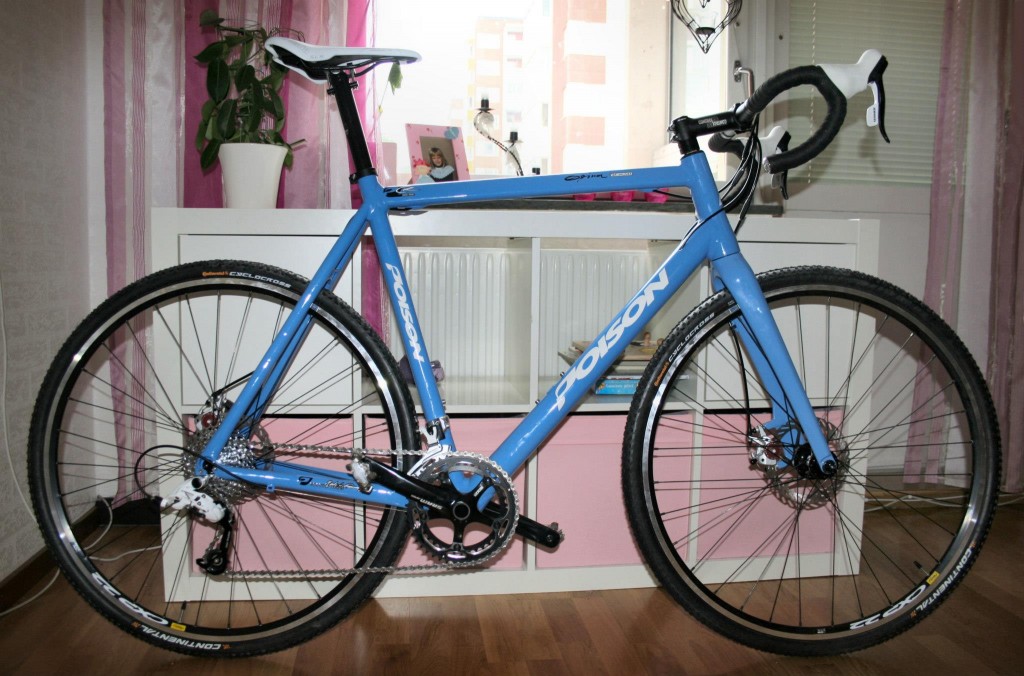 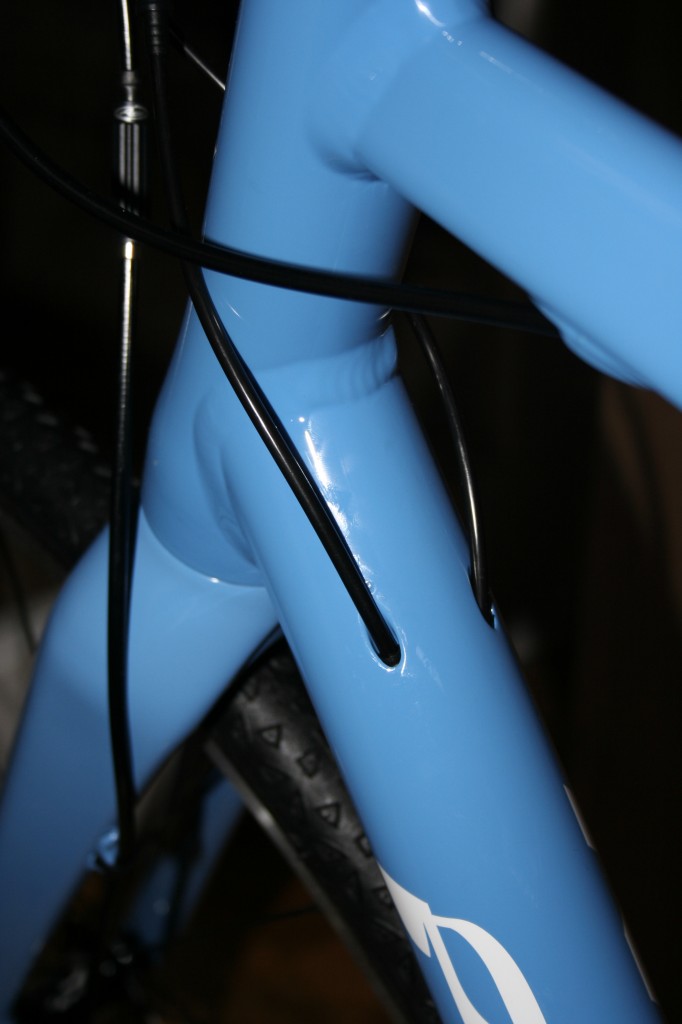 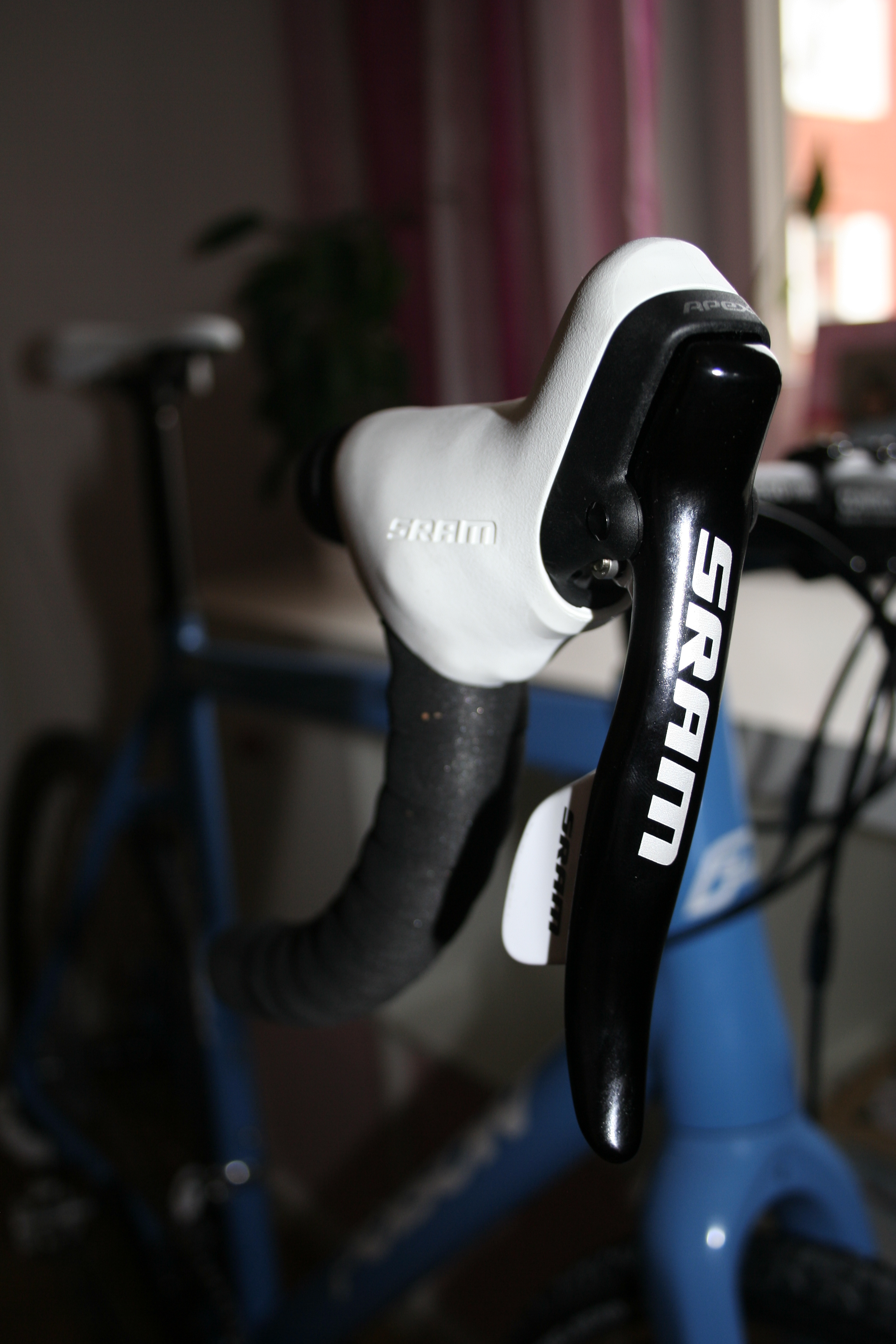 After first chasing Hellman to figure out where my bike was (no update on the tracking for two days) I finally reached them, it’s in Sweden!

One hour later, some local delivery company called to let me know they’ll come tomorrow and asked how much in advance the driver needed to call, so tomorrow will be big update with lots of picture time!