Lets continue from where we left, in Brattheden.

Things I didnt write about was the people we met at the bathing spot, several of them recommended we go to see the aftermath of a big forest fire a couple of years ago, so we decided on a detour to see that. before heading up towards Malung.

Morning started around seven, with some breakfast (apples I think it was) and packing of the camp, after checking the map one last time we headed north and up towards the forest fire site (we decided to head to Stabäck.
On the way we did stop shortly to fill some water bottles and check out the view of some old industry building on a island, turns out it was a oil refinery, and the Island was called “Oil Island” 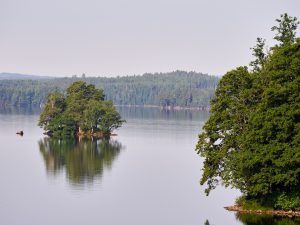 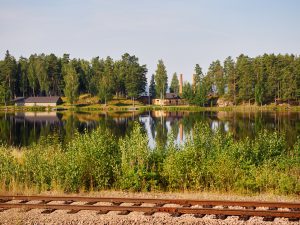 The lake and the oil refinery, nice scenary and still prety good weather..

While Hannu took these pictures I stopped at a small family run Antiquity store, called Ängelsbergs brukshandel, to fill waterbottles, I also ended up buying a dala horse and a table cloth to bring to my grandmother! 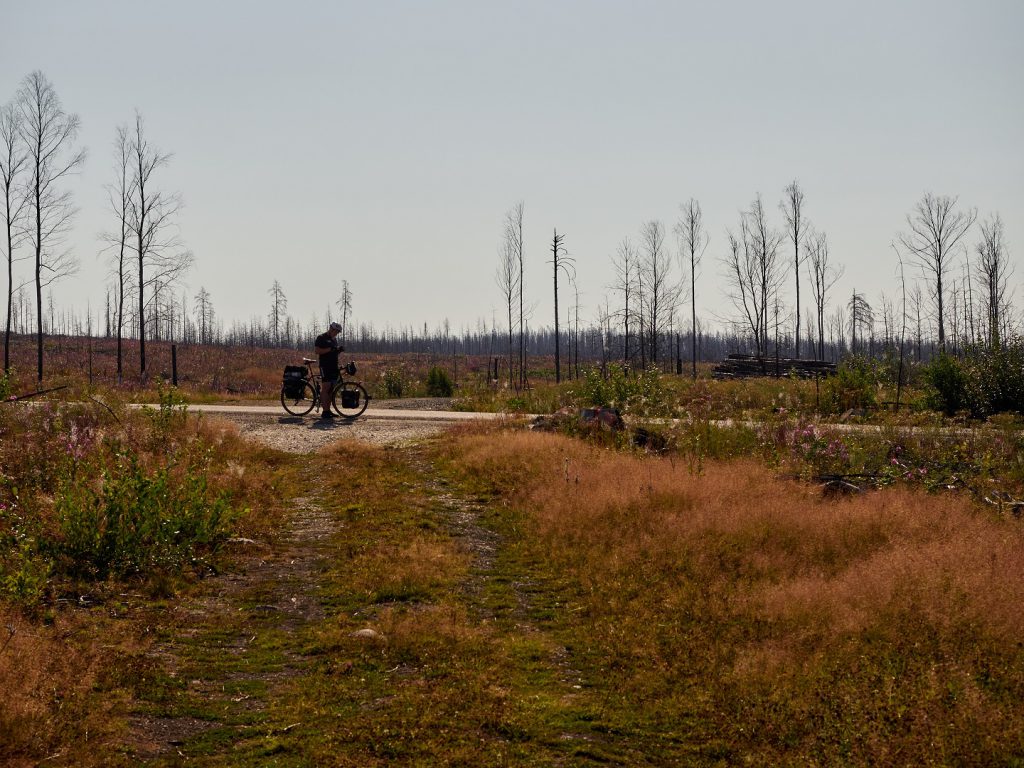 The forest fire area, it’s hard to show how big the area was, but the link in the start of this post show’s the wikipedia article about it.

After a brief uphill to see the forest, we turned back and headed towards Fagersta.
We didnt get that far before we stopped for some more sightseeing, this time we found some old steel mill (I think) 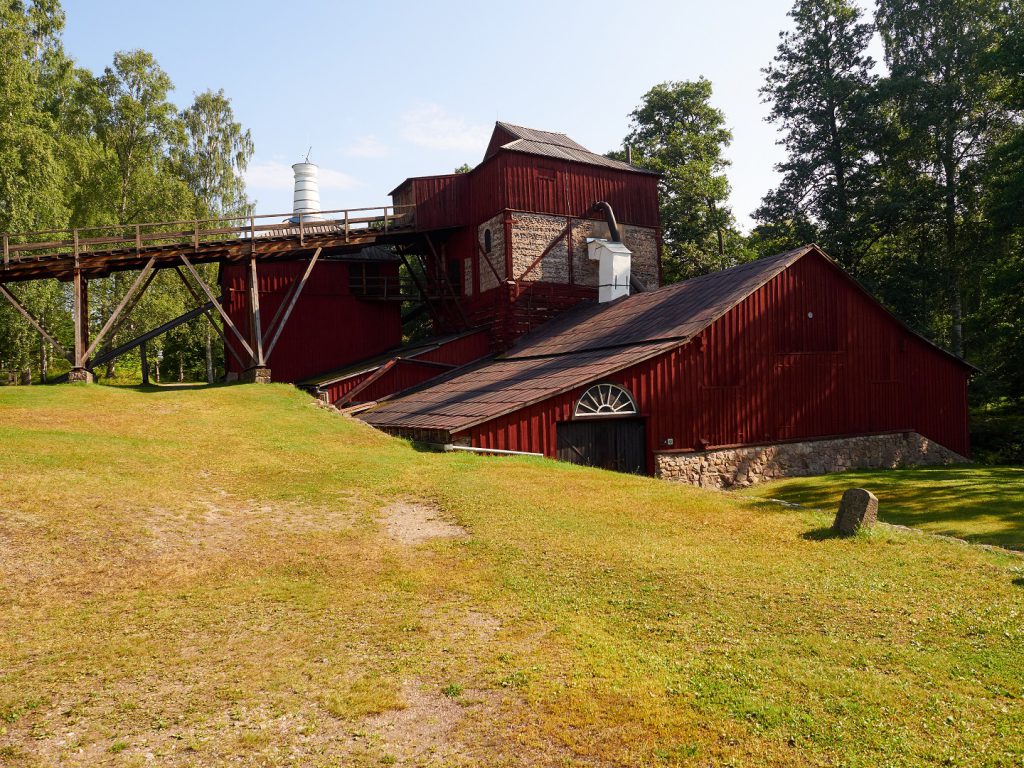 The main building of the steel mill, Ängelbergs Bruk 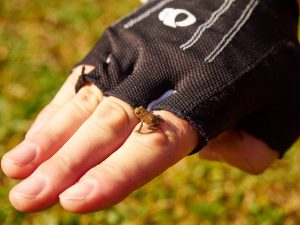 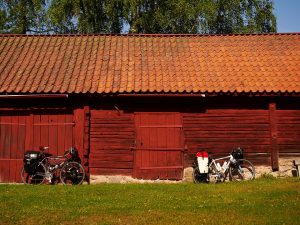 There where tons of frogs around there, probably from the small stream and high grass and all, and the must have picture of bikes leaning against one of the buildings!

Onwards again, towards Fagersta, Ludvika and our end destination for the day, Fänforsen.
The good weather we had was comming to an end it seems, we started on some fairly, I hate to say dull, but it was kind of dull roads up towards Ludvika, and to top it off we got some nasty rain showers, completly drenching us and even forcing us to have a stop in a bus shed. 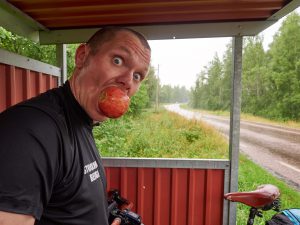 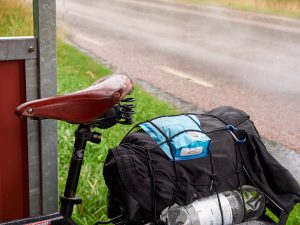 Said bus stop where we stopped to get out of the rain, I had another Apple, also the clothes I had to try on the top of my tent under the bungeecord net got kinda wetter instead of dry 🙁

After a 20 minut wait the rain seemed to stop, so we started the journey again, only to get more rain after 10 minutes, this time we stopped by a school, put on something more suited for the rain, and went all the way to Ludvika for lunch (Pizza of course), thankfully the rain stopped again and we had decent weather for some time.

The bike road from Ludvika started with some amazing bike roads, there is aparently a paved road going (atleast it seemed so to us) around the lake, according to Wikipedia it’s some old railroad converted to bike path, but we also saw some people with the handcarts on rails in the area (atleast I think we saw them there, might have been that we saw them elsewhere, but I never took notes as we were on the bikes). 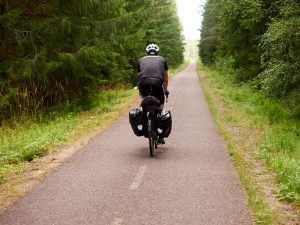 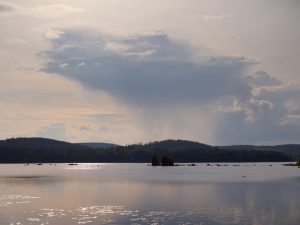 The bike road we followed was fairly smooth, and went through a nice forest area with plenty of lake views, thankfully the rain we saw seemed to be somewhere else than where we were going!

We followed this bike path for about 15km or so before we got on to the car road again, all the way up to Fänforsen, there was nothing really exciting to see or talk about on this road, but it went fairly smooth and without trouble so that was pretty nice.

Camp time, in Fänforsen!
The day might have started early but it got fairly “late” before we reached the stop we set out for during the day, I think it was around eight in the evening, thankfullt the Fänforsen resturant was still open so we could fill waterbottles, have a couple of beers and relax somwehere dry before setting up camp.
While setting up camp the weather took a turn for the worse and we got a thunderstorm, complete with rain and some nice wind, thankfully the spot we set up camp had some nice trees to set up our tarps, tents and hammock, there was also a scene in the park with a roof over, with some nice benches and a table so we could cook and eat with some shelter from the weather.
Worth mentioning that while cooking we got company from some motorcyclist going to Falun, so they joined us for an hour or so while they waited for the lightning to stop. 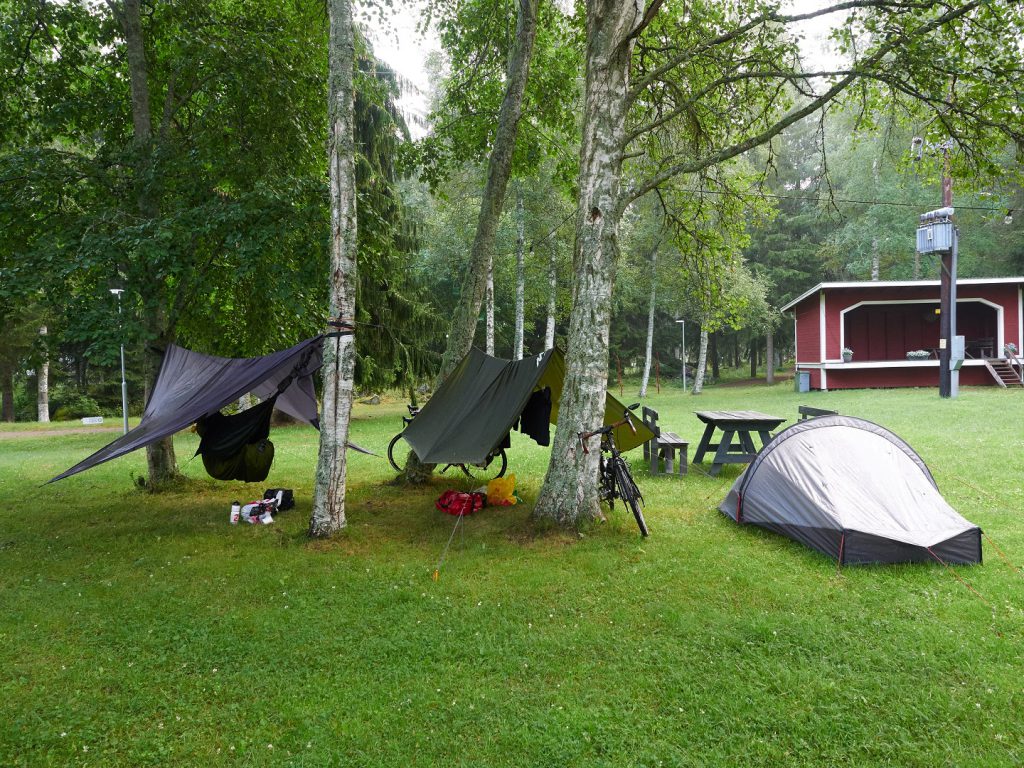 The campsite set up with tarps over the hammoch and our gear, you can see the stage in the back where we had our supper before the night.

And that it seems, was day two done, day three starts soon and as we get closer and closer to the border!

Day three, late start, some more rain and a day of shorter biking

We woke up a little later, or maybe slower, I think it was still around seven am, but packing camp felt slow, the tarp kept most of the rain of the gear and all, but the tent needed a whipe down, and I noticed that my brooks saddle cover was not 100% water proof so the sides of my flyer was now soft and soggy, the weather was thankfully looking better again so I left it in the sun to dry as much as possible before I started to pack, ended up putting a strap around it to keep it from bending, hoping like hell I would not end up with a sagging saddle for the trip, spoiler alert, it went fine!.

The view in the morning was pretty good and Hannu got some more good photos of the river. 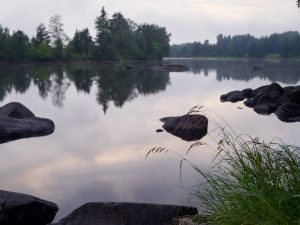 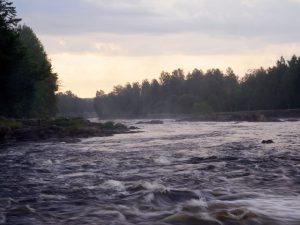 The view on the other side of the camp in the morning of day 3, with the calm river turning in to rapids.

Around 0930 we were ready to leave and started biking towards Vansbro for lunch, didnt take to long before the weather goods decided to show us what they could do, but at this point there was nothing todo but keep biking, most of the clothes were still a little moist from yesterday anyway. 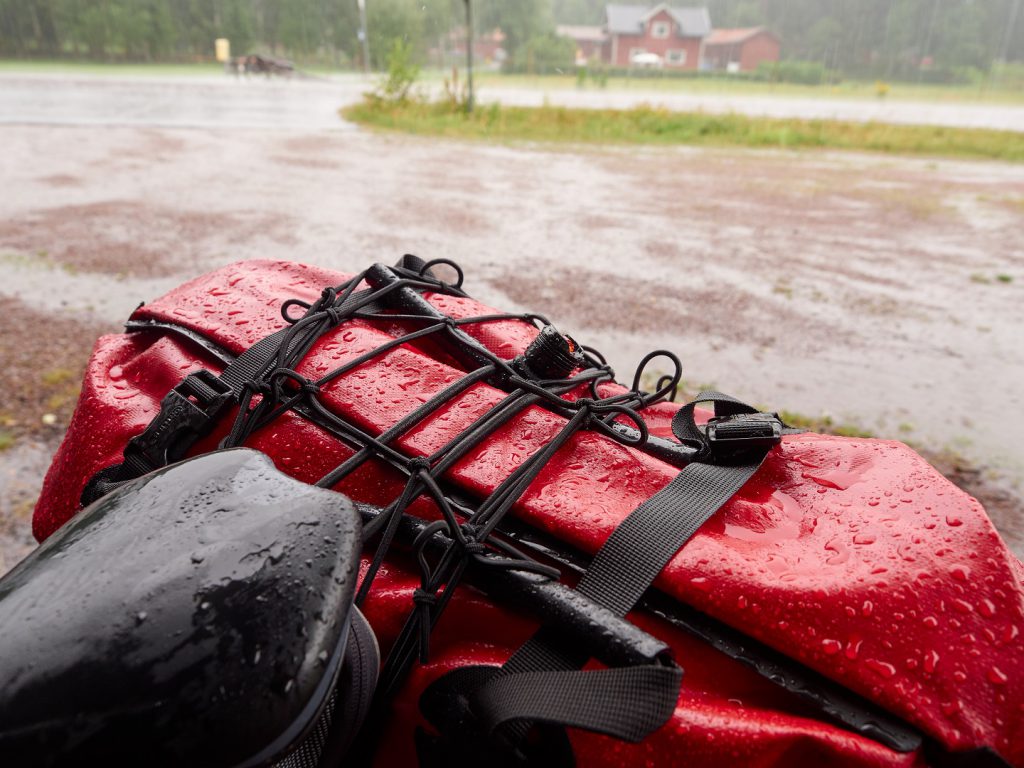 The rain hit hard, and with my soggy saddle we thought it better to stop in another bus shed, for awhile we tought about taking a “detour” to Dala-Järna, but we decided to just man up, put on rainjackets and go to Vansbro

We got to Vansbro around lunch and once again had pizza, the weather was nice again so we had a chance to atleast feel like we dried up a little, we also spent some of the time checking where to go, or more where to stop.
In the end we decided to take a small road towards Malung and stop at the camping spot there, there seemed to be a nice small town with some options to shop, I was considering a second pair of shoes, since my mesh summer shoes was in a constant state of wetness, or even some shoe covers, but more on that later.

The road out from Malung had some nice views, we didnt stop to check them out to much, but Hannu sent me two pictures. 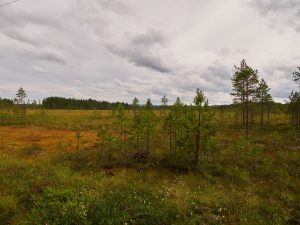 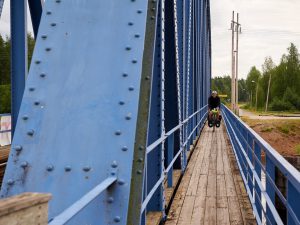 One of many steel bridge in Dalarna county, this is on the way out of Vansbro and then there is the marshlands going over a hill towards Malung.

We got to Malung fairly early, went to get tent spots only to find out that two tent spots where more expensive than a cabbin so we rented one of those, to our suprise there was even a electric drying closet in the cabin so no more wet shoes, we also took the opportunity to do some laundry, have a shower and relax. 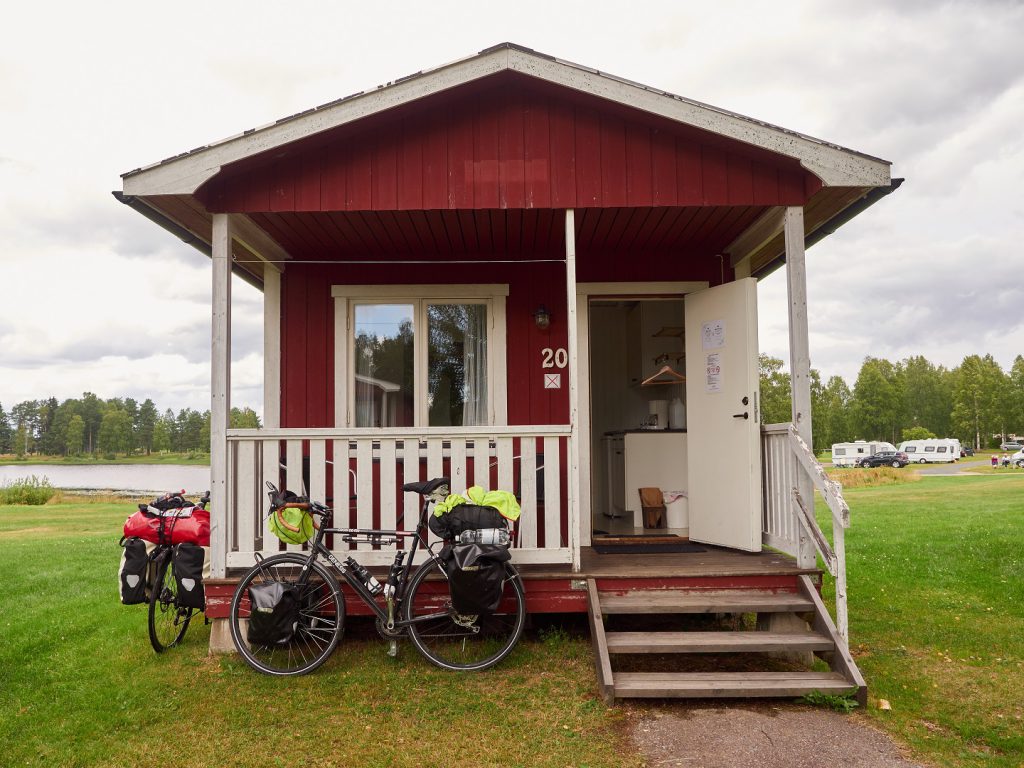 The cabin by the river, real beds, no rain or wet tents, generally just nice!

After Laundry and unpacking we walked in to town where Hannu and I ate at a thai resturant that was mediocre by big city standards, but still more expensive, before heading back to rest and sleep, Tomorrow would be the last day in Sweden!